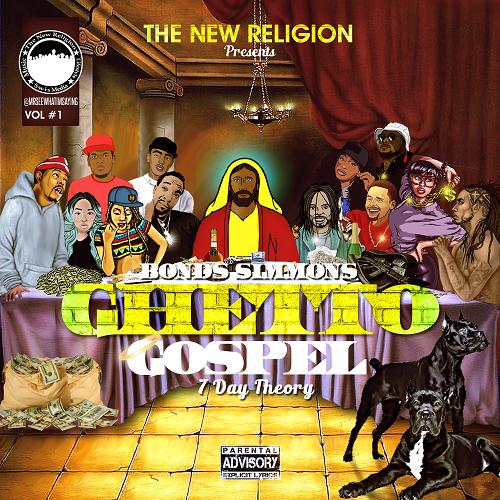 Born in NYC, based in Atlanta,GA bonds established himself as a extraordinary rapper in the mid 2000s umong the dvd era through his talent and help in the production of the most influential dvd S.M.A.C.K. as well as features in other top publications. Through a series of impressive independent releases bonds gained the attention and respect of the nyc underground rap scene. However a series of personal issues (that are all explained in recent studio recordings) derailed the artist and subsequently landed him in prison for a term. Upon a late 2014 release the artist found himself refocusing his agendas and rebuilding family. After finding success in the business world outside of music bonds reemerges as BONDS SIMMONS. Carrying the last name in effort to preserve legacy and refocusing his purpose as an artist introducing to the world a new brand ( THE NEW RELIGION) through which he hopes to have a positive effect on the culture so that they dont adapt the mindstate that he did at a point in his own life. He labels The new religion as not only a business but a ministry in what we like to refer to as a tripple M empire ( music,media,merchandise) look for our imprints on all 3 facets. in 2017 bonds released a highly reviewed mixtape entitled MAKE RAP GREAT AGAIN! (Currently Available on all platforms) on 5/25/2018 BONDS SIMMONS will finally be releasing his 1st long anticipated studio album GHETTO GOSPEL (7 Day Theory) Vol.1 it will be 1st of a series that is said to be the most important music an artist of this generation can make. Aimed to spark the mental as well as the spiritual being. This is part of the ministry of the new religion. There are also collaborative rap projects to be announced listen to BONDS SIMMONS music on your favorite music platform!

He’s currently waiting to share some new photos and videos with you today. Stop by and share some motivation if you can we look forward to seeing you.
Succeed by:
#GOD1ST
#BYANYMEANS
#THENEWRELIGION