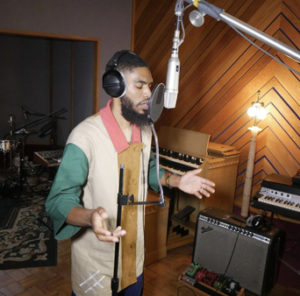 ATLANTA, GA – HassanMelanated grew up surrounded by the energy and magic of the music industry and now he is taking the reins on his own career. Influenced by the work of his father, Hitman Sammy Sam, his uncle who produced music, it was no surprise that HassanMelanated took to music as well. Now, fully on his own, HassanMelanated is releasing his newest single “Black Sheep”.

HassanMelanated has been involved in the music industry for several years now, but has only just taken on the intensity of working fully alone. Without others, however, we are able to see a track that fully encapsulates who this artist is. “I wanted to be true to who I am,” he said. “When people are listening to the track I want them to be able to say ‘Okay, this is who Hassan is, before all of the extra things get added in.’”

Before taking on his solo career, HassanMelanated began his career in 2016 with a duo group. From there, his love for music led him to pursue a solo career as well as a solo move to Africa. Now, back in the states, he is ready to share his music with the world. “Black Sheep” is now his first release since coming home.

“Black Sheep” does a brilliant job of letting listeners get to know who they’re listening to. It tells a story of who inspired HassanMelanated and how he got to where he is today. “I talk about my family and a little bit about how I came up. I’ve named a couple of people who inspired me, that I grew up with, it’s really just my story.” he explained.

HassanMelanated created “Black Sheep” with the intention of sharing who he truly is as an artist, but there is more to the song than just that. “This song is about staying true to yourself and taking care of your mental and physical health,” he said. “It reminds you not to be influenced by the negative things that can pull you in.” To HassanMelanated, this means putting God first, and focusing on his music.

While the song does have a deeper focus, it is meant to do more than simply introduce you to HassanMelanated. “Black Sheep” also has a dance feel to it, allowing people to enjoy the vibe of the song as much as they can enjoy the lyricism. This song is a full package.

“Black Sheep” releases on October 1, and from there HassanMelanated has even more to come. Following the new song will be the music video to go along with it. From there, HassanMelanated’s fans can look forward to future music and the upcoming album that he has in the works.

It is obvious that HassanMelanated’s experiences have already given him a great deal of skill and knowledge to do great things in the music industry. With a drive to succeed and the confidence to take risks that many would shy away from, he is already doing great things with his music. HassanMelanated is sure to continue to climb his way up to become one of the greats of Hip Hop.

“My goal is to be the best artist I can be, to reach my full potential and take the risks that other people won’t. I want to be known as someone who isn’t afraid to do things.”

Be sure to keep an eye out for HassanMelanated and check out his music on all major streaming platforms. Also remember to check him out on social media and follow him to keep up with new releases and other exciting news about this incredible artist.

Links to all of this can be found listed below.